Milk thistle has a potentially significant role to play in hemochromatosis. It’s one of the top natural remedies to help damage caused by too much iron in the blood.

The pink flowers from milk thistle are beautiful yet unassuming. They don’t scream “look at me!” like a rose, but they have a beauty to them that’s all their own.

Its name comes from the white splashes of color in its leaves.  When crushed, the plant produces a milky white liquid.  Because of these features, the story goes that people originally referred to the plant as “Mother Mary’s Milk” or “Saint Mary’s Thistle.”

What I really love about milk thistle, however, isn’t how it looks, but how they can help people in so many different ways. Whether it’s fighting free radicals or protecting our livers, milk thistle is one of the world’s top herbal medicines.

Milk thistle’s role in hemochromatosis hasn’t always been obvious. For many years, it was thought that this herb was completely inappropriate to use in iron overload, and it was recommended to stay clear from it. I know I avoided it for a long time due to this advice. But I now know better, and it is one of my favorite tools for hemochromatosis.

Read on to learn this fascinating story of milk thistle, and to see how you can incorporate it into your life as a vital tool to help with hemochromatosis and iron overload.

It is considered an herbal nutritional supplement and is not found in food.

The most common way someone takes milk thistle is as a capsule, a tea, or a powder. This botanical remedy is considered safe for the general population and doesn’t have many contraindications with other therapies or medications.

For an individual with hemochromatosis, milk thistle may be one of our very best remedies!

The traditional use of milk thistle dates back to the 4th century BC.

The health benefits of milk thistle are most commonly associated with liver function.  While most traditional use and medical research of milk thistle has focused upon its effects upon the liver, this plant remedy has a wide range of benefits to overall health.

The most famous active constituents in milk thistle are called silymarin and silybin.

These two polyphenols are the likely reason for many of the health benefits seen from this herb.

Silymarin and silybin are what make milk thistle a liver protector, an antioxidant, and an anti-inflammatory agent, protecting the cells from free radical damage due to excess iron.

The most famous use of milk thistle is in liver health. Almost any liver condition you can think of may be indicated for using milk thistle. It’s been studied and used for fatty liver disease, cirrhosis, hepatitis, and other situations that lead to liver damage…including hemochromatosis.

Not only does Milk Thistle help prevent oxidative damage, but research has also demonstrated its ability to help the liver to repair and regenerate from cellular damage.

In addition to the way it supports the liver, milk thistle works as a:

As you may suspect after learning about hereditary hemochromatosis and the use of nutritional supplements in iron overload, a substance that helps the liver, reduces inflammation, supports blood sugar regulation, and provides antioxidant powers is something to keep around in the hemochromatosis toolbag!

Studies abound illustrating the ways milk thistle might be used in someone with hemochromatosis.

Research has shown milk thistle may lower ferritin, as well as benefit liver function and other concerns in iron overload.

Powerful polyphenols found in milk thistle, including silymarin and silybin, have been shown to benefit liver function and improve health. In particular, silybin has been investigated in clinical research involving people with hemochromatosis.

In one study of patients homozygous for the C282Y mutation of hemochromatosis, milk thistle (“silybin”) reduced iron absorption from food.

Researchers noted that “consumption of silybin with a meal resulted in a reduction in the postprandial [time directly after a meal] increase in serum iron.” This means consuming milk thistle with food resulted in a measurably lower amount of iron that made it into the body.

“In conclusion, silybin has the potential to reduce iron absorption, and this deserves further investigation, as silybin could be an adjunct in the treatment of haemochromatosis.” – Eur J Clin Nutr. 2010 Oct;64(10):1239-41. (Reference)

Another exciting benefit seen in research is milk thistle’s ability to lower ferritin.

One study showed a “significant decrease in ferritin” in a study looking at those with chronic hepatitis.

Milk thistle may help to reduce ferritin, as shown in this study on patients with chronic hepatitis.

Researchers consistently find benefits to Milk Thistle, including in cases of iron overload:

Silybum marianum or milk thistle (MT) is the most well-researched plant in the treatment of liver disease. Silymarin acts as an antioxidant by reducing free radical production and lipid peroxidation, has antifibrotic activity and may act as a toxin blockade agent by inhibiting binding of toxins to the hepatocyte cell membrane receptors. Silymarin reduces liver injury caused by iron overload. (Reference)

These studies are just a few of the many that have been done on this remarkable herb. See our references page for more if you want to continue your own research.

How to Use Milk Thistle in Hemochromatosis

Milk Thistle may be an excellent complementary supplement to your current therapy for hemochromatosis and doesn’t seem to be something to avoid for fear of side effects.

An illustration of the safety profile comes from the Mayo Clinic as their website states about the safety of milk thistle:

According to the Mayo Clinic, a typical dose depends on the condition being addressed; however, most ranges are between 140 mg and 600 mg daily. And if something is considered safe 4-6 years or more, you can feel pretty confident in its safety.

How to Take Milk Thistle in Iron Overload

There’s not enough research on hemochromatosis and milk thistle to know precisely how to dose this herb, but it gives a range to explore based on the available research.

There’s a bit of a long story to explain this topic. In fact, I’ve written an entire article about this very situation!

Because of the great potential milk thistle has to help in hemochromatosis by blocking iron absorption from meals, by reducing ferritin, by protecting from free radical damage, and by protecting the most vulnerable organ, the liver, we have included milk thistle as a key ingredient to one of our customized supplement formulas.

Each ingredient in Hemochromatosis Help’s Milk Thistle Supreme supports the body’s antioxidant functions with a special affinity for supporting liver health, which is the organ most vulnerable to oxidative damage from iron overload.

Additionally, the remedies in Milk Thistle Supreme have been shown to help block the absorption of dietary iron and to even lower ferritin! 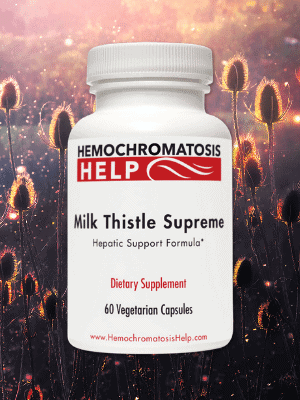