Making Dietary Choices When You Have Hemochromatosis

In a diet for iron overload, it is important to understand which foods you should pay the most attention to.

There are two kinds of naturally occurring iron in foods that are absorbed and handled differently by our bodies.

The two forms of dietary iron are heme iron and non-heme iron:

Another way to think about Heme vs. Non-Heme is by categories of foods:

The way our body absorbs these two types of iron is very different:

This, of course, will be different in those with hemochromatosis, which I will explain more in a minute.

It is important to note that heme iron comprises only 40-45% of the iron in meat. The rest of the iron contained in meat is actually this non-heme form (55-60%).

When you see the milligrams of iron listed for a portion of meat, approximately half of that is heme, and half is non-heme. This becomes important to understand when thinking about substances that help block iron absorption, as most work only to block non-heme iron.

Why Does Heme vs. Non-heme Iron Matter in Hemochromatosis?

You may be wondering, “Why does any of this matter?”

This is one reason why a vegetarian (without hemochromatosis) is more at risk of developing iron-deficiency anemia than people who eat meat; the exclusively non-heme iron found in plants isn’t as available to our bodies as heme iron is.

People who eat meat are getting both non-heme and heme iron while vegetarians only get non-heme, even if they include dairy and eggs.

The absorption of non-heme iron in people without hemochromatosis is approximately 5-12% of the iron listed on the nutritional label. This is because during digestion, the body has to alter non-heme iron to take it in fully.

Heme iron is a different story. In someone without hemochromatosis, 20-30% of the heme iron they consume is absorbed from a meal.

In hemochromatosis, the absorption of heme iron is up to four times greater, meaning 80-100% of heme iron can be absorbed!

Take that a step further and imagine meal after meal, day after day, year after year. If every hamburger consumed leads to this amount of iron absorption, then it can really add up.

This variation between what a food label states and what our body actually absorbs makes questions like, “How many milligrams of iron should I eat?” such an impossible question to answer. As you’re maybe starting to realize, it’s just not that simple!

One study that looked at how the foods we eat with an iron-rich meal impact how our body absorbed the iron discovered that:

“Heme iron…is well absorbed and relatively little affected by other foods eaten in the same meal. On the other hand, the absorption of non-heme iron, the major dietary pool, is greatly influenced by meal composition.”

Non-heme iron, the iron found in both plant and animal foods, is typically viewed as less threatening and less important for a hemochromatosis diet. This very same iron is the one we have the most ability to affect and change by diet.

But when I say affect, I don’t just mean in a good way. The absorption of non-heme iron can be dramatically increased by unknowingly combining it with foods that make its effect WORSE for our situation.

For example, certain nutrients may increase non-heme iron absorption from seemingly benign foods such as rice and corn two or threefold- which is the last thing we want.

But on the other hand, that same knowledge can be used to help reduce the iron absorbed from our meals.

We should be very conscientious about including the nutrients that impair non-heme iron (and one that also impairs heme iron!) absorption as part of our overall diet.

In a more general sense, the following is a highest-to-lowest list of foods that typically have a high amount of heme iron: 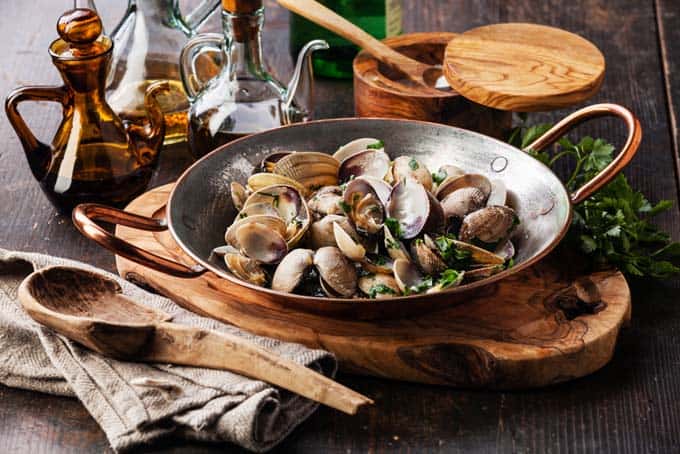 The following is a highest-to-lowest list of foods that typically have a high amount of non-heme iron:

We all have to eat, and many nutritious foods contain iron in them. Therefore it is important to understand heme iron vs. non-heme iron so we can make the best choices for our health.

What To Eat When You Have Hemochromatosis
References

Would you like to read hemochromatosis success stories? Learn more here.

Would you like to learn more ways to help your hemochromatosis? Join our newsletter.