Hereditary Hemochromatosis – One of the Most Common Genetic Diseases

You are not alone!

However, this condition of iron overload is massively under-diagnosed or misdiagnosed and thus numerous people have the condition and do not know it.

In fact, estimates show 1 in 9 people of Northern European descent are carriers of the HFE gene mutation that can cause this disease of iron overload and 1 in 200 carry two genes. 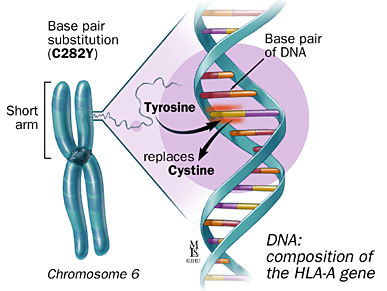 Two copies of the C282Y hemochromatosis gene is the most likely mutation to cause symptoms.

These individuals are called “homozygous carriers”– and their health may be very seriously at risk due to too much iron.

A combination of the C282Y gene with a mutated H63D gene may possibly express symptoms of the disease.  The term for this condition is called “compound heterozygote.”

Many resources will tell you that people with only one copy (“heterozygous carriers”) of the HFE gene are unlikely to express any symptoms or problems.

However, this may not be the case!

Over the years, countless people from all over the world who are hemochromatosis carriers have told me their symptoms of too much iron even with a single copy.

The bottom line is this: excess levels of iron may compromise your health if it is not identified soon enough or treated properly.

Fortunately, there is much that can be done to help!

Just what is hemochromatosis, after all? Because you are reading this page, it is likely that you or a family member have been diagnosed with this condition of iron overload.

It is also possible you are having a hard time pronouncing, or even spelling, hemochromatosis!

Hemochromatosis is a genetic metabolic disorder of too much iron absorption during digestion which may lead to iron overload in the cells of the body.

While blood levels of iron may be elevated, the primary problem stems from the accumulation of iron in the body’s cells, tissues, and organs.

The process of iron overload is typically slow to develop and may not affect a person’s health until they are in their 30s, 40s, or even their 50s or 60s.

The symptoms of hemochromatosis can range from mild to severe, and the disease itself can be fatal if it is not identified in time.

For most people, the condition of iron overload is genetically inherited, thus why it is often referred to as Hereditary Hemochromatosis (HH).

As a genetic condition, it is very important that family members of an affected person get tested for their iron levels and genetic markers.

Primary, or genetically determined, causes include:

** Note- The primary emphasis for this site will be on the Type 1, HFE gene mutation because it is the most common cause of iron overload (approximately 90% of cases of what is hemochromatosis).

Type 1 Hemochromatosis is the result of a mutation to the HFE Gene, located on Chromosome 6.

The term for “HFE” is kind of creative, and it stands for “High Iron.” Iron’s chemical symbol is Fe… thus HFE. See the creativity?

This gene codes for a protein involved in iron absorption, and when mutated, causes the body to take in excess iron from food and water.

Genes often have alternative forms of expression, called alleles. Different alleles can lead to different traits (like hair or eye color), but alleles can also mutate and create “missense” proteins. This change in the DNA is permanent and can be passed down through the generations.

In the genetics of what is hemochromatosis, the most common mutated alleles are:

There are different types of mutations, and the severity of the disease is determined, to a great extent, by which type of gene mutation is present:

Doctors will often state that clinical hemochromatosis is only found in individuals homozygous with two C282Y mutations. As a result, many people that are compound heterozygous or heterozygous may be told that they don’t have iron overload and that there is no reason for them to treat this condition.

If you are a hemochromatosis carrier, your health may be at risk due to a degree of iron overload.

Clearly there is a disconnect in how to define “what is hemochromatosis.” I have personally experienced symptoms from having too much iron and I have worked with and communicated with many people who also suffer from an excess of iron in spite of “only” having one mutation. As a result, I see a benefit in supporting the health of individuals who are either heterozygous or homozygous.

Loved this? Spread the word

Dr. Eric is a Naturopathic Doctor who also has a genetic predisposition to hemochromatosis. With his unique perspective of being both a practitioner & patient, he provides a new understanding about the best nutritional strategies to support health with hemochromatosis. He is the author of Holistic Help for Hemochromatosis, a guide to the use of diet and supplements in healing from iron overload.

Hereditary hemochromatosis causes a progressive loading of iron over time. For individuals with the END_OF_DOCUMENT_TOKEN_TO_BE_REPLACED

A diagnosis of hemochromatosis may happen in several steps. Even though iron overload is END_OF_DOCUMENT_TOKEN_TO_BE_REPLACED

We use cookies to ensure that we give you the best possible experience on our website. By continuing to browse this site, you give consent for cookies to be used.OkLearn More