A cup of warm tea. A blanket and a cat and a book and a snowy window.

This is my version of peace, serenity, and calm.

Across almost every culture, a cup of freshly brewed tea brings up positive feelings and impressions.

Did you realize, however, that tea may also be one of the best tools you have against hemochromatosis and iron overload?

Who knew this innocent, delicious drink could have such strength and power over the damage caused by too much iron in the blood?

Read on to learn about how green tea can be used to combat excess iron and practical ways to incorporate it into your life to receive the full benefits.

Green Tea (Camellia Sinensis) is famous for many reasons. As an herbal remedy, it’s beneficial for heart, liver, and brain function. It is consumed around the world as a delicious, health-promoting beverage.

Of its many potent compounds, it is the high level of polyphenols in green tea that makes it such an incredible tool for hemochromatosis. Polyphenols are molecules found in many plants that protect the plants against the sun’s ultraviolet radiation and from disease.

Polyphenols can bind to iron and inhibit iron absorption by your body.

Polyphenols can bind up to 60% of iron from a meal, making a significant difference in the prevention of future iron buildup. [i]

Quite a number of scientific studies have noted Green Tea’s ability to reduce iron. Researchers have remarked upon Green Tea’s role in addressing iron overload, noting that:

“Green tea shows many pharmacological effects, particularly antioxidative and iron-chelating capacities. Green tea is a bifunctional natural product that could be relevant for management of iron overload and oxidative stress.” [viii]

Another study monitored those with hemochromatosis who drank tannin-rich teas, including green tea, found:

“A significant reduction in iron absorption was observed when the test meal was accompanied by drinks of tea instead of water. In the tea-drinking group, the increase in storage iron was reduced by about one third compared with that of the control group. Regular tea drinking with meals reduces the frequency of phlebotomies required in the management of patients with haemochromatosis.”[ii]

By including a simple cup of tea, you can reduce iron absorption by a third. Over time, this can lead to a very significant change.

While this is great, the research suggests there are ways we can get even more benefit from green tea.

Keep reading to see what I mean!

How to Use Green Tea with Hemochromatosis

When it comes to the studies on green tea and other polyphenols, the possible ways polyphenols can help with iron overload include:

In addition to drinking or taking a supplement with green tea, other ways to increase your polyphenol intake include drinking coffee and black tea and eating colorful berries.

When consuming polyphenol-rich foods, you should not limit yourself. There is evidence that when it comes to this compound, more is better.

Sometimes it’s hard to get enough from diet alone, which is why green tea, in particular, is often found in nutritional supplements in a more concentrated form than you could easily drink in a day.

Would you like to read hemochromatosis success stories? Learn more here.

Would you like to learn more ways to help your hemochromatosis? Join our newsletter.

It matters how much green tea you consume to get all the health benefits.

There is evidence that when it comes to polyphenols and green tea, more is better.

A single cup of tea, while enjoyable, does not convey the full health benefits that the research links to green tea. Most people are not willing or able to consume the 5-10 cups of tea a day required to get enough of the helpful polyphenols!

This is where a supplement of green tea may come in handy. Instead of drinking tea all day long, a high-quality green tea supplement can concentrate the essential benefits into one small capsule.

This is why we’ve created in the Hemochromatosis Help Green Tea capsule–one capsule is equal to 10 cups of tea!

Other Tips for Using Green Tea to Lower Iron:

[vii] Mascitelli and Goldstein, “Inhibition of iron absorption by polyphenols as an anti-cancer mechanism.” 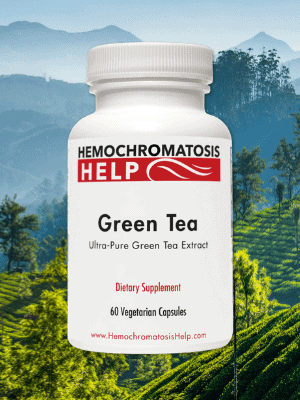 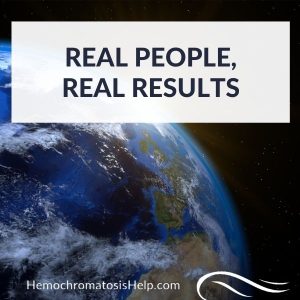