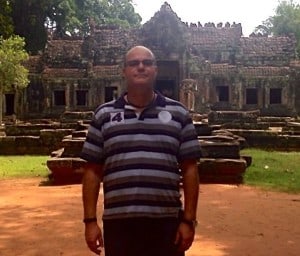 My name is Andy Ross; I am a fairly typical 46 year old bloke, slightly over weight as many middle aged men are with a good medical history, aside from an annual dose of the “Man Flu” I have never had anything really to complain about (sporting injuries aside).

About 4 years ago I started getting pains in various joints in my legs, left knee for a day or two, right foot for a week, then for a holiday it would switch over to the left foot, right knee or perhaps an exotic journey into my elbow joints. Living in Hong Kong I am fortunate that access to specialists is not a lengthy process so I was sent to an Orthopaedic surgeon. He diagnosed arthritis both Rheumatoid and Osteoarthritis, all caused by playing too much sport when younger (rugby, football,  athletics, cricket etc; if you could compete in it, I did it). As a result I was put on various medications, Celebrex for the inflammation, Tramadol for the pain and sleeping pills when the pain was too bad.

By the age of 43 I was the proud owner of my own walking stick and spending entire weeks unable to walk at all. This was humiliating, especially to me as my vision of myself is of a fairly athletic guy who would still have decent chance of playing for Leeds (I still think I can score the winner in the FA Cup final, ridiculous I know) higher doses of the drugs were proscribed. There would be good weeks when I was only in minor pain and could limp my way to work and have some form of social life. I became a bit of a joke with friends as they would invite my self and wife to parties, drinks etc but never expect me to be available. Should I show up then I would be offered a chair and treated like a prince. These are good people, they could see my pain.

What they could not see and what I tried to hide was the damage to my own pride and self belief being crippled was doing. I developed erratic mood swings varying from deep depression to excessive happiness, bi-polar type changes depending on the level of pain on any particular day. What they also did not see was the effect this was having on my wife who not only had to put up with the moods but was watching the man she married disintegrate in front of her.

Life continued like this for the next 3 years, my weight ballooned as I could not exercise; I probably drank more than was healthy and resigned myself to being “a bit useless” and in constant pain, until 2 months ago when I woke up one morning feeling very dizzy. I could not blame a hangover or food poisoning so put it down to a bit of dehydration (Hong Kong is extremely hot in summer) and spent the day in bed taking on fluids. This had not been the first time but being a typical bloke I had ignored it as being anything serious. The following day was exactly the same, so I forced myself to see a doctor (being Hong Kong this is very quick), one blood pressure test later and I am booked into see a Cardiologist that afternoon as the GP was convinced I was on the verge of a stroke. The Cardiologist was not overly optimistic either so yet more medicines prescribed to reduce the blood pressure, statins for cholesterol, aspirin to thin the blood all very typical except to my great fortune this doctor had trained in Edinburgh. When he heard my medical history he ordered a blood test to check my iron levels and liver function. I was also booked in for a stress test on my heart to see if I had any heart disease/damage.

Bingo! I have the stress test, slight damage to the heart, a bit of clogging but nothing irreversible and oh, by the way, you have the signs of Hemochromatosis. A condition unheard of in Asia but because of his training in Scotland something he had seen before. Further tests on my liver, spleen and pancreas and a second blood test confirmed that 1) my internal organs were twice their normal size due to excessive iron, 2) we had caught it early enough to prevent cancer or cirrhosis and 3) treatment is available.

The relief of knowing that there was a cause to all the pain, the mood swings, the frustration, the chronic fatigue, the useless creature I had become is impossible to describe. Knowing that treatment will take away the joint swelling, stop cancer, cirrhosis, the depression, make me whole again has changed my life.

I have started on a medicine called Exjade (see www.HemochromatosisHelp.com for alternatives) which has already started the process of removing the iron from my system. Already the joint pain has reduced, my moods have improved though I am still prone to fatigue and my energy levels are low. I am only 2 weeks into the treatment so this is to be expected.

My very very good luck to find, by utter chance, a doctor who has seen this condition before has saved my life, my marriage and my career. By finding www.HemochromatosisHelp.com I have discovered that I am not alone but also hundreds of thousands of British, Irish and Scandinavian people (and people with ancestors from these areas – think of the history of Yorkshire alone) are suffering the symptoms but not being diagnosed. One simple blood test will discover the truth; the treatment can be as simple as donating blood to the Red Cross once a month or taking a pill (check the website). If you know anyone who has symptoms similar to mine, drag them to a doctor and get them tested. It could change and save your life too.