A diagnosis of hemochromatosis may happen in several steps. Even though iron overload is a very common genetic disorder, many people go years or decades before they find out they have it.

Many doctors may not consider hemochromatosis in their diagnosis because they are thinking about other conditions that may have a similar presentation, such as arthritis, menopause, or general fatigue caused by any number of “normal” reasons. It is essential, however, that they be thorough and include iron overload in their differential diagnosis thought process.

Furthermore, the signs and symptoms of iron overload are often different for women and men. This may affect diagnosis because a doctor will have to account for the different ways a man or a woman may experience hemochromatosis.

Even though there are a number of individual and gender differences in iron overload, doctors can still come to a diagnosis of hemochromatosis based on a number of tests.

There is a progression of testing when it comes to diagnosing iron overload. When it comes to blood tests, some markers that represent the level of iron in the body fluctuate relatively quickly (for example, serum iron). A one time test of slightly elevated serum iron is not enough to diagnose hemochromatosis, as there are other reasons that might cause iron levels to be elevated, such as inflammation or infection.

To be thorough, your doctor may evaluate a number of factors if he or she suspects iron overload. It is important to not jump to any conclusions on the path to diagnosis. The Mayo Clinic summarizes this well:

Hereditary hemochromatosis can be difficult to diagnose. Early symptoms such as stiff joints and fatigue may be due to conditions other than hemochromatosis.

Many people with the disease don’t have any signs or symptoms other than elevated levels of iron in their blood. Hemochromatosis may be identified because of abnormal blood tests done for other reasons or from screening of family members of people diagnosed with the disease.

This graph illustrates just how varied symptoms can present prior to diagnosing hemochromatosis:

To understand the progression of diagnosis, let’s start first with blood tests.

The two most important tests to begin with in potentially diagnosing iron overload are transferrin saturation and ferritin. Some doctors prefer to do these tests separately from one another, and some doctors like to do these tests together, so your experience will likely depend on your physician’s preferences for blood testing.

Here is a good description of the basics of these two tests from the Mayo Clinic:

Serum ferritin. This test measures the amount of iron stored in your liver. If the results of your serum transferrin saturation test are higher than normal, your doctor will check your serum ferritin.

Regarding ferritin, I will add to the Mayo Clinic’s description that elevated ferritin levels reflect stored iron in a number of organs, like the spleen, bone marrow, brain, joints, etc., not just the liver. While ferritin levels are frequently highest in the liver, ferritin is certainly not limited to only the liver.

Personally, I think of ferritin as representing the body’s cellular burden of iron. This is the most straightforward way to characterize iron inside our cells.

Another consideration is that a number of other conditions besides hemochromatosis can cause an elevated ferritin level. Inflammation, infection, and liver disease are other common reasons that ferritin levels rise. Your physician will understand this, and should take it into account when diagnosing you.

While transferrin saturation may also be increased for reasons outside of hemochromatosis (again due to issues such as inflammation, infection, and liver disease), this marker is often the first clue of iron overload. According to Dr. Andrea Duchini, MD:

High transferrin saturation is the earliest evidence of hemochromatosis; a value greater than 60% in men and 50% in women is highly specific.

Diagnosing hemochromatosis can be difficult! Awareness and early diagnosis are essential. For example, Dr. Duchini expresses how challenging it can be:

Approximately 30% of women younger than 30 years who have hemochromatosis do not have elevated transferrin saturation.

Women in their early 20s have written to me about their stories, and a common theme is that they went years without proper diagnosis in spite of having symptoms of hemochromatosis. Being young may have something to do with this, but I’ve also seen how there are many misconceptions of how hemochromatosis affects women differently than men.

From a lab testing perspective, however, there are different standards (that do make sense) for men and women. Dr. Duchini again:

Serum ferritin levels elevated higher than 200 mcg/L in premenopausal women and 300 mcg/L in men and postmenopausal women indicate primary iron overload due to hemochromatosis, especially when associated with high transferrin saturation and evidence of liver disease.

If transferrin saturation and/or ferritin are elevated, the next step in hemochromatosis diagnosis is often genetic testing. 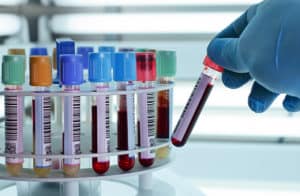 Genetic testing often entails another blood draw, although some lab companies offer a test that involves swabbing the inside of your mouth to collect cells to test. Both tests are evaluating the DNA for possible changes of the HFE gene, specifically for the C282Y, H63D, and S65C alleles.

Once a physician has evaluated a person’s signs and symptoms, his or her transferrin saturation and ferritin levels, and the genetic test, a diagnosis of hemochromatosis may be made.

Should my family members get tested for hemochromatosis?

Because hemochromatosis is hereditary, the question next turns to the family members.

Should any other blood relative family members be checked? What about children?

Family members identified as having C282Y homozygosity should be tested for transferrin saturation, serum ferritin, and liver enzymes; screening of young children of patients with hemochromatosis does not need to be performed if the spouse is tested and does not have the C282Y mutation.

Early awareness is essential. The sooner a person with iron overload can be diagnosed, the better.

Treatments are abundant, and outcomes are better when started earlier.

As a result, consult with your doctor and please tell your family about hemochromatosis!

Loved this? Spread the word

Dr. Eric is a Naturopathic Doctor who also has a genetic predisposition to hemochromatosis. With his unique perspective of being both a practitioner & patient, he provides a new understanding about the best nutritional strategies to support health with hemochromatosis. He is the author of Holistic Help for Hemochromatosis, a guide to the use of diet and supplements in healing from iron overload.

Hereditary hemochromatosis causes a progressive loading of iron over time. For individuals with the END_OF_DOCUMENT_TOKEN_TO_BE_REPLACED

Hereditary Hemochromatosis – One of the Most Common Genetic Diseases

You are not alone! Millions of individuals and their families from around the world END_OF_DOCUMENT_TOKEN_TO_BE_REPLACED

We use cookies to ensure that we give you the best possible experience on our website. By continuing to browse this site, you give consent for cookies to be used.OkLearn More